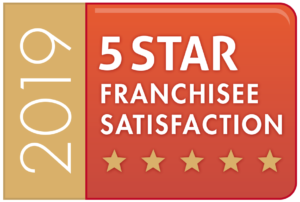 The latest results are out from WorkBuzz, who have been gathering objective feedback from franchisees across 100 franchise brands since 2011, for their annual Franchisee Satisfaction Benchmark Survey. For the 7th consecutive year, ActionCOACH franchise partners have recorded 5-Star levels of satisfaction.

Last year, ActionCOACH were joined by just three other franchisors who had achieved the 5-Star Franchisee Satisfaction status six years in a row. Now with 35 stars to their name, the world’s number one business coaching franchise who were also awarded Best B2B Franchise at the Best Franchise Awards in November 2018, is celebrating this fantastic achievement.

“We’ve made big changes in the last 12 months with the introduction of our new Senior Partner licence, but our franchise partners have responded as we hoped – rising to the challenge of reaching more business owners than ever before. The key to supporting them to success is our 50-strong dedicated support team and the 70 days a year of support offered to our franchise partners. We’re proud to receive a 100% score from our franchise partners agreeing our team is willing to go the extra mile but rest assured, we won’t be resting on our laurels any time soon,” said Ian Christelow, Co-founder of ActionCOACH UK.

Want to know more about our franchise? Click the link below to watch the overview video

Understanding The Pandemic and How to Cope With The Financial Symptoms

Next Level BizX is CPD Certified

How Will Your Business Survive The Coronavirus (COVID19) Economic Panic?