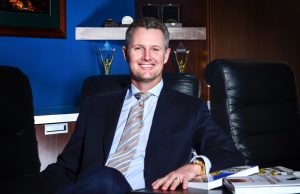 “I’m a business coach,” says Brad Sugars. “I started in business in my teenage years. By my early twenties, it had got much more sophisticated. I’ve been teaching business, mostly from a stage but I have also written 16 books on the subject. I teach on business, sales, marketing, management, leadership, systemisation, all the different areas of business which help someone become a great entrepreneur.”

“ActionCOACH is the original business coaching company,” Sugars says. “We started business coaching programmes in 1993, spread across the world. We are now in 73 countries helping owners grow their businesses. We work with C-level executives and we coach them on how to grow their business by growing themselves and their team. We do group programmes and one-on-one coaching programmes; we operate at all sorts of different levels.”

“We now have offices in 73 countries and we will do hundreds of millions in revenue this year. But it’s not really about our size. Our culture is more about the size of our clients, who keep growing and adding new jobs. Each year we add tens of thousands of jobs around the world and that’s what excites us.”

“We started in August 1993, so it will soon be our 25th birthday,” Sugars says. “The company was launched from a spare bedroom; like most people starting out, I couldn’t afford an office. At the time I was doing business seminars & events for people and they were asking me how could I help them? I couldn’t really consult with them all, so I started this thing called coaching where I talked to them once a week and helped them out.”

Certainly it is one of them, as with any entrepreneur, but his underlying commitment to see the 3000 businesses supported by ActionCOACH coaches has at its heart his memories of a period of deep family difficulties when his father’s business failed.

He understands the feeling of business failure, and passionately cares about helping businesses grow and succeed by recognising and addressing skills gaps.

If the amount that you have increased in gross profit after 6 months of coaching is not equal to, or higher, than the investment you have made, then we will pay you the difference. Our coaching programmes have been tested and proven all over the world, so when you hire an ActionCOACH, you WILL get results.