Portsmouth-based Action Coach, Steve Mullins, is celebrating after being shortlisted for a nationally-recognised award. Steve has been hand-picked by a panel of judges to be in the running to win Male Young Franchisee of the Year at the 2019 bfa HSBC Franchise Awards.

The nomination means that the 30-year-old business owner and specialist business growth coach will attend an awards ceremony at The VOX in Birmingham in June, to find out whether he will take home the coveted title.

“It’s a great pleasure to find that I’ve been shortlisted. Being in business, and running a franchise, is an extremely enjoyable experience and I feel really grateful to be recognised by the judges – just by doing something I love.” 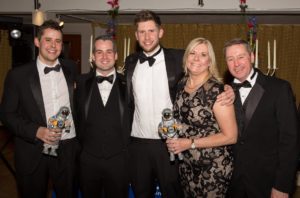 After joining ActionCOACH Portsmouth to work with his father in 2010, Steve has shown no signs of stopping anytime soon. First as a Business Development Manager and now as a joint business owner and coach, he’s having a positive impact on local businesses.

Pip Wilkins, CEO of the bfa said, “Steve is one of ActionCOACH’s top performing coaches and his franchise unit is performing exceptionally. He has been involved with the company for nearly a decade now and that experience has helped him shine as a franchise partner.”

The shortlisting recognises his true commitment – and at such a young age too. His drive and passion to do what’s best shines through with his clients, and simultaneously gained traction with the judging panel to place him in the Top 3 in the UK.

The panel consisted of various industry professionals, including Andrew Brattesani who is the Head of Franchising at HSBC. He was impressed by Steve’s progression, “Steve has immersed himself in the family business, learning the necessary skills to thrive and run the operations himself, really finding joy in watching his clients’ businesses grow.”

Steve will now face a formal judging panel next month before finally finding out if he comes out as No.1 at the awards ceremony in June.

Why Your Business Plan is a Must

How to Succeed in a Niche Market